a) for the Blue Planet Award 2011
People who have committed themselves to the conservation and the preservation of our Blue Planet in an outstanding way.

b) for the Black Planet Award 2011
People who have committed themselves to the destruction and downfall of our Blue Planet in a shocking way.

When ethecon speaks about the „Blue Planet“, the foundation means the entire world, both animated and inanimated, the whole social and ecological entity of our planet.

Neither of the International ethecon Awards entail a remuneration; but the Blue Planet Award consists of a prize designed by the renowned photographic artist Katharina Mayer explicitly for this purpose. Its gallery value is estimated at not less than 10.000 Euros.

The proposals for nominees are to be put forward by May 30th 2011 to:

The proposals have to be mailed and must include:

(Example: In the case of the Black Planet Awards to MONSANTO and NESTLÉ some nominators took part in the award ceremonies in Berlin and were also involved in the organisation of protest activities at the headquarters of these companies to hand over the Black Planet Awards. On the occasion of the following general meetings of the companies an Open Letter to Stockholders and Management was publicised).

Please note that no rights can be derived from the submission of proposals for both international ethecon awards.

ethecon - Foundation Ethics & Economics is an internationally operating foundation located in Berlin/Germany, whose founders and members originate from different countries, and are active in social and ecological movements in Germany as well as internationally.

The foundation is dedicated to the strengthening and effective (financial) support of social movements advocating justice, peace, and ecology.

Founded in 2004, ethecon is still a young and growing foundation and thus looks for more interested donators and supporters.

The Blue Planet Award went to:

2006 the stockholders and the executive management of MONSANTO / USA

2008 Erik Prince and the executive management of XE (BLACKWATER) / USA

2010 the major shareholders and the executive management of BP / UK 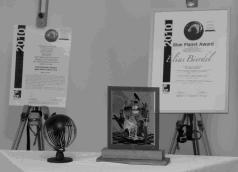