About 3 million people were abandoned, including about 300,000 children, in the area contaminated by the radioactive fallout following the triple-meltdown worst-case accident of the Fukushima nuclear power plant. The guilty corporation TEPCO and the government have not been informing them honestly about the dangers and do not provide appropriate medical aid. Groups like Mothers of Fukushima have been building and running a self-managed children‚s hospital, and ethecon is supporting this project with the campaign „STOP TEPCO“ and beyond.
In June 2012, an ethecon delegation visited the contaminated area during its stay in Japan for the presentation of the 2011 Black Planet Award to the managers and major shareholders of TEPCO  those responsible for the mega-disaster that is affecting all of humanity. The government and corporations failed to evacuate more than 3 million people. They were left all on their own without effective help, among them about 300,000 children. Appalled by this barbarism, ethecon combined the political campaign against those responsible for the humanitarian mega-disaster with a campaign of solidarity with the population in the affected areas and also with Japan‘s anti-nuclear movement.
In cooperation with Japanese NGOs like Mothers of Fukushima ethecon is collecting donations for the construction of a self-managed hospital to help the children in the areas of the prefecture Fukushima contaminated by radioactive fallout. About 30,000 euros (roughly $ 35,000) have already been collected. ethecon is proud to have contributed significantly to the construction of this clinic which started operating in 2013. 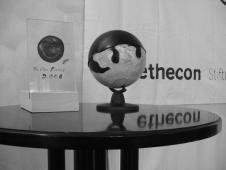