Since 2006 the foundation ethecon  Ethics & Economy awards two international prizes: The Blue Planet Award and the Black Planet Award. The two awards are the outcome of a cooperation between the world-famous ZERO artist Otto Piene and the ethecon foundation. At the same time the awards are also an expression of the cooperation between the great art photographer Katharina Mayer that exists since 2010.
The aim of the Blue Planet Project initiated by the ethecon  Ethics & Economy foundation is to seek and find annual award winners. In addition, an annual presentation of the award takes place during an official ceremony which is held under a new theme every year in the context of our responsibility to sustain a liveable world. It is inspired and held in cooperation with the ZERO artist Otto Piene. 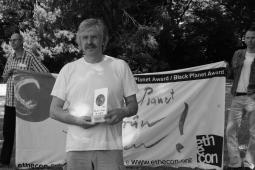